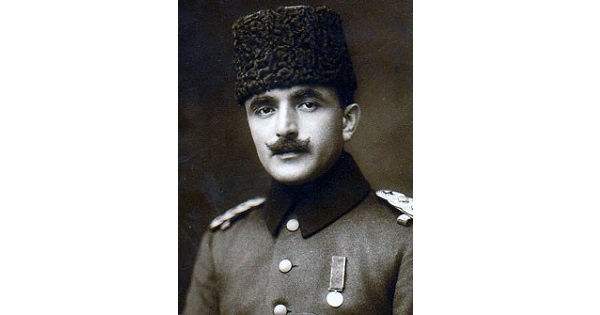 Ismail Enver Pasha (or simply Enver Pasha) was a military commander and political leader during the Greek Genocide. He was one third of the ruling Committee for Union and Progress (CUP) triumvirate, also made up of Talaat (Minister of the Interior) and Djemal (Minister of the Marine).

Enver was born in Constantinople and graduated from the Military Academy there in 1903. Soon after, he entered the army and quickly rose through the ranks. Enver was one of the organizers of the 1908 Young Turk Revolution. In 1909, after the fall of Abdul Hamid, Enver went to Germany to take military training and spent considerable time there as military attaché. By the time he returned to Constantinople, Enver spoke fluent German and had developed close connections with the German hierarchy. This was to play a part in the secret Ottoman-German alliance just before the outbreak of WW1 and with the reorganization of the Ottoman army.

In January 1914, Enver became Minister of War and by the Spring of that same year, he and Talaat practically dominated the Turkish Empire. As Minister of War, Enver quickly set about reorganizing his forces by removing many officers and replacing them with German officials and his preferred personnel. According to Mahmut Celal Bey (Bayar), head of the Smyrna cell of the CUP in 1914, the CUP and the Ministry of War run by Enver “were parallel to the regular activities of the government, working towards the liquidation of the concentrations of non-Muslims in the Aegean region”.1

As Minister of war, Enver had at his disposal a secret special forces unit called Teşkilat-ı Mahsûsa (Special Organization, or SO). Through the SO, Enver was able to achieve the systematic physical destruction of the Ottoman Greek population by deportations and massacre. According to Kuscubasi Esref, an SO leader, the [ethnic] cleansing was a planned event. Esref quoted Enver Pasha as saying on Feb 23, 1914, that non-Muslims had to be got rid of as they had proven that they had not supported the continued existence of the state and that the salvation of the state was linked to stern measures against them.2 During the Greek Genocide, Turkish gangs or chettes, also called bashibazouks, carried out many persecutions, plundering and murdering as many Ottoman Greeks as they could. These gangs, which were financed and run by the state, consisted of members of the SO.

In 1916, a decree was issued by Enver Pasha, calling for the Turkification of Greek and other place names. Enver stated:

“It is important to change into Turkish all names of provinces, regions, villages, mountains and rivers belonging to Armenian, Greek, Bulgarian and other non-Muslim peoples. Making use swiftly of this favorable moment, we beseech your help in carrying out this order.”3

Henry Morgenthau, US Ambassador to the Ottoman Empire during the First World War, met Enver on a number of occasions and at one stage described him as “a savage, bloodthirsty Turk”.4 At the end of the war Enver fled to Germany. He was sentenced to death in absentia by Turkish Court Martial in Constantinople for his role in the genocide.

1. Matthias Bjornlund, The Persecution of Greeks and Armenians in Smyrna, 1914-1916: A Special case in the course of the Late Ottoman
Genocides, The Asia Minor Catastrophe and the Ottoman Greek Genocide. Illinois 2012. 96.
2.  Ibid, 102.
3. Turkification of the Toponyms in the Ottoman Empire and the Republic of Turkey, Lusine Sahakyan, Ph.D.  Democritus University of Thrace, p7.
4.  Henry Morgenthau, Ambassador Morgenthau’s Story, Doubelday, Page and Company, 1918. 251.