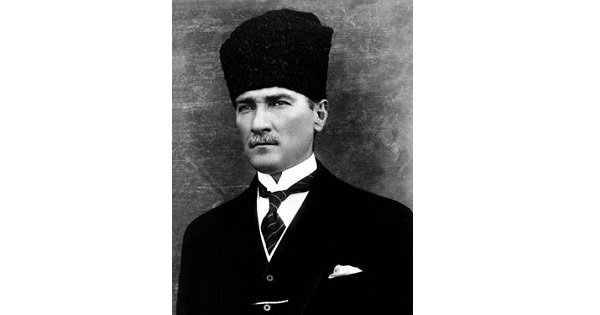 Mustafa Kemal ‘Atatürk’ was the consummator of the Greek Genocide. He was born in 1881 at Thessaloniki, Greece (then part of the Ottoman Empire).  He attended the Ottoman Military School in Constantinople and graduated in 1905. Around 1908 he joined the Committee for Union and Progress (CUP). Kemal was an officer of the Turkish Army and founded the Turkish Nationalist Movement (the Kemalists) by regrouping the Ottoman Army, Turkish irregulars and the remnants of the CUP. He continued the genocidal policy engineered by the Committee for Union and Progress.

Ottoman Greeks were persecuted throughout Asia Minor and Eastern Thrace under the Kemalists. Between the period 1919-1923 reports from the media, accounts from missionaries, foreign diplomats and survivor testimonies, all describe an organized plan of extermination of Greeks.

On the 6th of August 1921, the Maryborough Chronicle of Queensland published an article titled “Reign of Terror by Kemalists–Massacre of Greek Subjects” referring to  Kemalists rounding up Greeks in Trebizond and putting them to death.1

On the 23rd of March 1921, The Examiner of Launceston reported: “Concentration of Kemalists–Terrible Massacres of Christians”, referring to a terrible 3-day massacre of Christians in Caesarea in the interior of Turkey.2

On the 14th of June 1922, a New York Times article subtitled “Kemalist Troops Employed in Systematic Campaign of Murder and Starvation” reported on the massacre of 15,000 Greek men, women and children in the district of Rhodopolis. The report also described how the Greeks from the town of Geronta (today Didyma) had been deported to the interior toward Mugla, a distance some 132km away.  Dr Dalalio, an Italian physician of the Red Cross, personally witnessed atrocities by Kemalists in the town of Macri (today Fethiye) with his own eyes and the deportation of all males from the ages of 12-85 to Funjah and Malatia.3

The Armenian-Greek Section was formed by the British High Commission in Constantinople and was a series of 87 meetings conducted during the period February 1919 to November 1922. On the meeting of the 29th of September  1920, it was reported that a large band of Nationalists led by a certain Djemal, surrounded the Greek quarter of Iznik (Nicaea), seized the entire population numbering about 600, and afterwards massacred them. No survivors had been found.4

On the 5th of July 1920, 120 Kemalists and 600 Turks surrounded and pillaged the four villages at Foundouklia near Ada Bazar. They collected 7,800 sheep and all cattle belonging to Christians. The men were shut up in a church and the women exiled. The men were then ordered to come out in fives and were shot. Of the population of 3400, 400 men were murdered and 30 of the women were exiled. The rest of the population fled to the mountains.5

Apart from ravaging Greeks in villages and towns en masse, Mustafa Kemal also established special tribunals or Courts of Independence to sentence to death hundreds of influential Greeks – usually by hanging - including publishers, mayors of towns and villages and previous members of the Ottoman government. Through these courts, Greek intellectuals and the political elite throughout Asia Minor were killed in a matter of months. In the Pontus region alone 60 people per day were hanged during the month of September 1921.6

Historian Dr. Mark Levene, in his journal titled “Creating a Modern Zone of Genocide" stated: "...the CUP committed genocide in order to transform the residual empire into a streamlined, homogeneous  nation-state on the European model. Once the CUP had started the process, the Kemalists, freed from any direct European pressure by the 1918 defeat and capitulation of Germany, went on to complete it, achieving what nobody believed possible: the reassertion of independence and sovereignty via an exterminatory war of national liberation."7

Mark Hopkins Ward, an American physician was working at the American Hospital in Harpoot during the deportation of Greeks in Asia Minor.  He was expelled by the Turks for keeping notes on the deportations. Ward described the deportations by saying: “The Kemalists pursued with vigor their considered and systematic campaign for the extermination of the Greek minority in Asia Minor, which was attended with the same incredible brutality as marked the Turkish massacre of 1,000,000 Armenians in the early part of the Great War.” 8

One of the final acts of the Greek Genocide was the burning of Smyrna (today İzmir) by Kemalist troops in September 1922. At the conclusion of the Greco-Turkish War a victorious Mustafa Kemal entered İzmir on September 10. The following day Turkish soldiers and civilians began a systematic orgy of rape, looting and murder of the Armenians and Greeks of the city. On the 13th of September a fire was lit by Turkish troops which eventually burnt to the ground the Armenian, Greek and European quarters of the city; the Turkish quarter was spared. Kemal then issued a two week ultimatum for all Greeks and Armenians to leave otherwise they would be deported to the interior. All men between the ages of 18-45 were declared prisoners of war and were immediately sent to the interior, most of them to perish. In his memoires, Winston Churchill (1874-1965) wrote “..Mustapha Kemal's Army .. celebrated their triumph by the burning of Smyrna to ashes and by a vast massacre of its Christian population...”9

One of the world’s most despised dictators, and the perpetrator of the 20th century’s most notorious genocides Adolf Hitler, often referred to Turkey as being a role model for him, and Atatürk as being his 'star in the darkness.' Hitler expressed admiration for Atatürk and repeatedly stressed that he was Atatürk‘s student. In 1938 during an interview with Turkish politicians, Adolf Hitler said, “..Atatürk was a teacher; Mussolini was his first and I his second student."10  Hitler also considered Atatürk‘s Turkish Nationalist movement as being a ‘shining star’ for him.

In an interview with Swiss journalist Emile Hilderbrand, published on Sunday 1 August 1926 in the Los Angeles Examiner under the title "Kemal Promises More Hangings of Political Antagonists in Turkey", Mustafa Kemal acknowledged the Turkish massacre of its Christian element but attributed responsibility to the Committee for Union and Progress: He said:

“These left-overs from the former Young Turkey Party, who should have been made to account for the lives of millions of our Christian subjects who were ruthlessly driven en masse, from their homes and massacred, have been restive under the Republican rule.”11

Today, Kemal holds the title "Atatürk" meaning Father of Turks and is regarded as a national hero in Turkey where it is illegal to insult his memory. However, western academics have widely questioned the 'Turkish' view of Kemal's role in the late Ottoman Empire. For example, in a speech at the European Parliament in Brussels on 13 November 2008, Dr. Ronald Münch from the University of Bremen pointed out that if Atatürk were alive today, he would have to stand trial for war crimes.12