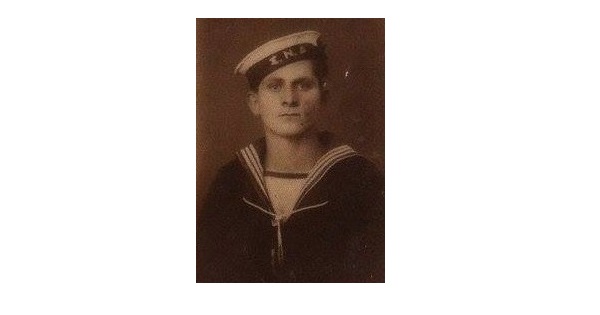 The testimony of Panayiotis Nikolaidis of Smyrna (today İzmir) as told by his grand-daughter Chrysa Nikolopoulou.

My grandfather Panayiotis Nikolaidis was born in 1909 in the town of Mudanya which is located in the province of Proussa (today Bursa). His family home in Proussa overlooked the sea and he remembered it vividly. Panayiotis had five brothers and a sister.

At the time of the Smyrna Holocaust (September 1922), Panayiotis and his family were living in Smyrna, and days before the city was torched, Turks violently murdered his father. As a result, his mother and a group of friends and relatives all decided to leave their homes and escape to the relative safety of the Smyrna shoreline.

Panayiotis and his group waited along the shoreline for days in scenes of pestilence, fear and despair. As ships eventually began arriving to take them away, he was separated from his mother and siblings. As his turn arrived to leave the harbour and board a waiting ship, he turned to his mother and noticed she wasn't well, suffering from the effects of the ordeal. People in his group told him to keep moving: “Come on Panayiotis. Your mother is unwell. She's sleeping. She'll come with the others.” That was the last time he saw his mother and siblings.

My grandfather spent some time in the Near East Relief orphanage on the island of Syros before being taken to Greece. Once in Greece, he was all alone and had to fend for himself. After completing military duty, he worked a number of jobs mainly in the Pireaus region. He started by selling hair pins, before purchasing a street stall in which he roasted peanuts and sold to the public. With the money he saved, he purchased a ticket and traveled to Germany hoping for a better life.

He returned to Greece and moved to Corinth, a region in southern Greece where he worked as a farm-hand picking apricots, lemons, oranges and grapes, whatever was in season. He felt at home in Corinth as it was inhabited by many refugees from Asia Minor, and it wasn't long before one of his employers gifted him a small parcel of land. It was in Corinth where Panayiotis fell in love, married and raised a family. He married the daughter of Eleni Tserlidou, also a refugee from Asia Minor.

Life was all about survival for the refugees of Asia Minor and my grandfather's life was no different. Food and shelter were the two most important things to him. He was a modest man who lived a simple life without luxuries, but there was one thing that he couldn't stand; and that was legumes. That's because whenever he thought of legumes, he thought of the times he was fed legumes as an orphan on the island of Syros. He would tell me that when the spoon hit the bottom of the plate, it would make a noise because in the soup there were rocks. He didn't eat legumes for that reason.

My grandfather lived his entire life searching for his lost siblings, but he never found them. While he was certain his mother died on the Smyrna harbour and didn't leave those shores, he lived with a constant hope of finding his five brothers and sister. For almost 50 years he searched, asking any refugee he encountered in the street or elsewhere, if they knew anything about the whereabouts of his brothers and sister. In the 70's he even inquired through the Red Cross, but to no avail.

Panayiotis Nikolaidis died in 2003 at the age of 94. Despite his age, he was mentally agile and able to converse right till the end. A day before he passed, my grandfather had a vision, one which he shared with me as I sat by his bed-side. He described being in a beautiful garden, and his mother calling him: “Panayiotis come!” He then saw a Turkish soldier on horse-back chasing him while brandishing a long sword. This was the last scene that was playing out in his mind before he died. It may have been a scene from the Smyrna shoreline as his group awaited to be taken to safety. Or more likely, it was the moment the Turks arrived at his home and murdered his father. I never had the chance to ask him exactly what it was he envisioned before he died, but I could clearly see the fear in his eyes as he told the story. I will never forget the look.

Note: If you have a story to tell about your ancestors' experience during the Greek Genocide, please fill in our online questionnaire