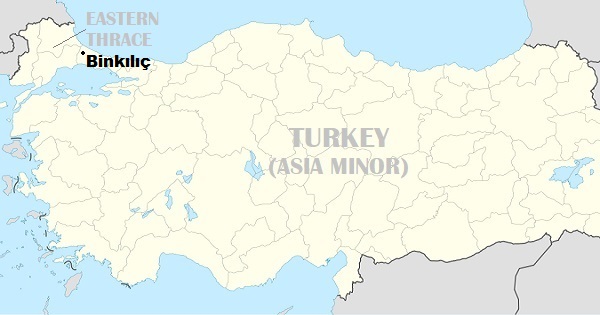 Strantza (Tr: Binkılıç) is located in Eastern Thrace approximately 80km N-NW of Istanbul. According to one source, the town had a population of 7,000 people (1,500 families). Of those, only 15 families were Turks.1 Eleni Constantinides gave the following eye-witness account on the 14th of April 1914:

On Easter Monday, at 10 in the morning, a corporal and his gendarmes, with swords drawn, forced the villagers to close their shops by brutal methods. They ordered 150 families to leave on the morrow, and the remainder the day after. When a young man asked 'Why must we leave?' he was unmercifully thrashed. Subsequently, they visited the different quarters of the village accompanied by Ottoman emigrants, who stoned the Christian houses, saying 'either be gone, or we shall kill you, you swine of infidels.' The streets were full of Turkish emigrants who appropriated the hens, cattle and eatables they found in the shops.

On Tuesday, the village elders were called to the Police station. There, the corporal addressed them, saying: 'Tomorrow you will give me the 800 Turkish lira you collected from your fountains.' On their answering that they had deposited the money in the Bank of Constantinople, the corporal, after first whipping them, searched their pockets, took away their watches and whatever else they possessed and then handed them over to the gendarmerie [police]. They were then stripped of their clothes, imprisoned, and stones and dirt thrown at them through the window. The corporal meanwhile sent police to their houses asking for 20 Turkish lira as ransom. Their wives gave from 5 to 7 lira each and at two o'clock in the morning they were set free and escorted to their houses by gendarmes.

On Wednesday at 5 o'clock, loud cries were heard. It was reported that Corporal Ismail, an Arab, accompanied by a hundred Turkish emigrants, entered the houses with swords drawn and fell upon the peasants, calling them every foul name of swine and infidels. Then, I noticed that the carts belonging to the Turkish immigrants were waiting before the doors of the peasants' houses. In front of each door there were ten immigrants and a cart with its driver who claimed Ltq.4 in advance for his fare. It is worthy of notice that the Turkish immigrants entered the houses and took for themselves whatever they required in the shape of clothing, kitchen utensils, etc., and then stoned us from our own houses, in which they had established themselves.

The convoy was composed of 250 carts belonging to the villagers, followed by 500 carts belonging to the refugees. After going along for a long time, we noticed six gendarmes and about 150 horsemen coming towards us. They arrested the elders and conducted them to the Police station in order to make them pay the tax over again. After unmercifully beating them and dragging them along like beasts, they made them sign a document — contents unknown — and threatening them with their revolvers, extorted 10 lira each from the three and 3 to 5 lira each from the remainder of the elders.

After two hours' march we reached a deep and narrow ravine where we found Corporal Ismail with a number of immigrants, apparently waiting for us. As soon as he saw us, he ordered our drivers to stop, and dragging the women out of the carts beat them savagely. They snatched the earrings the women wore and in so doing cut their ears; they forced them to undress in order to get at the necklaces they wore, and often tore them off their necks with such violence that in one instance a woman's throat was cut, causing the blood to flow in torrents. They also pulled off the hair of the young girls. From one widow alone they took away jewelry worth 150 lira in gold. From the wife of the cashier of the church, they took away 12 Greek shares and two preference shares worth 200 lira. These she had hidden under the clothes of her baby, forty days old. At last my turn came, and I was robbed of 17 lira I had on me. They ran away with an image of St. George in silver, which an old woman wore. No one, whether male or female, old or young, was spared; all were searched and robbed.

Towards evening we reached a valley, and while the police were actively engaged in searching the pockets of every one, the Turkish immigrants fell upon and carried away the luggage of the villagers. From the cart I was in, they took away the mattresses, sewing-machine, and clothes of a poor girl, besides our bread and food and the small basket which contained some medicine we had managed to take away with us. We passed the night in great trepidation, but as it was, nothing happened. We started again on Thursday at five in the morning, and at three in the afternoon after undergoing a further search. Our peasants would have defended themselves were it not the cart-drivers were immigrants, besides which each one was accompanied by two well-armed men. On Thursday night we slept on the ground without any covering at all. At eleven o'clock on Friday morning, the two gendarmes who had stripped us of everything on the previous day, claimed as a reward five piastres per cart for having escorted us safely to the frontier of Heraclea.

At Heraclea (today Marmara Ereğlisi) 200 families were embarked on board the S.S. Markella, but the greater part of their luggage was stolen by the gendarmes of Heraclea and stored in a Turkish Coffee House.