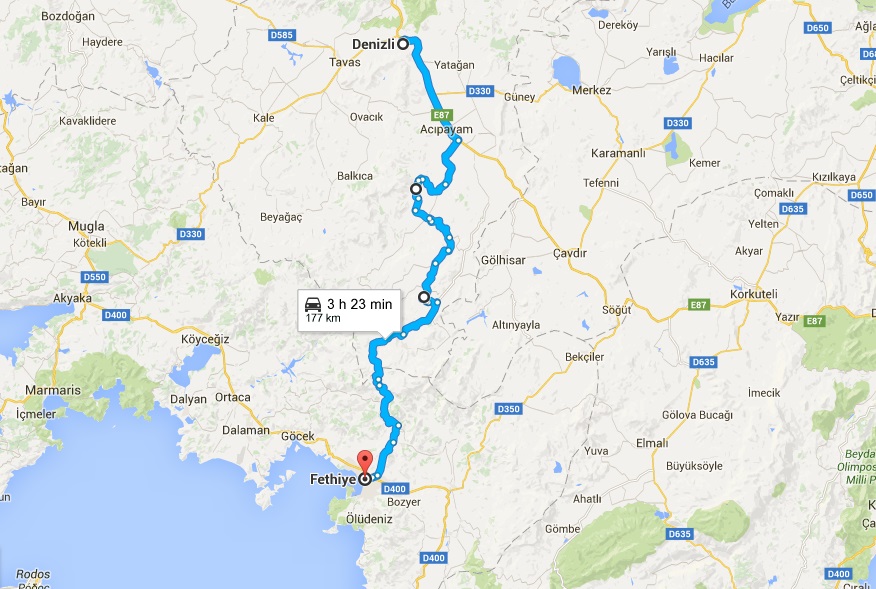 The approximate route for the deportation described belowi.

Below is the testimony of Despina Papantoniou, a native of Fethiye.

Between 1916-1917 the Turks decided to remove the Greek population from the shoreline out of fear that Greece may land and would be helped by the local Christians. The deportation started in October 1916. I was the only woman who was deported with my husband, because I was a teacher. After a terrifying 15 day journey, we arrived at Denizli [approx. 170 km north]. Rain, cold, snow and typhoid was killing the people. We stayed at Denizli for two years - we worked and lived there - and when the Armistice arrived [October 1918], we were given permission to return to our homes. In September of 1922 an order was given to evacuate everyone from the shoreline. We were given 3 days to leave. We were only allowed to take a few things with us. We weren't allowed to take gold and silver coins, in fact we weren't allowed to have any jewelry on us at all. At our own expense we paid a fare to board a sailing ship which took us to Rhodes, and from there we were sent to Greece aboard Greek ships.

Further reading:
- The Persecution of the Greek Communities of Livissi (Kayaköy) & Macri (Fethiye)